revenge ~ avatars and manyness * emerges from conversations between Oreet Ashery, Suza Husse and Verena Melgarejo Weinandt and channels many chats, rants and dreams with friends and lovers.

Revenge as imagined by the zombiesque figures, exhausted beings, slug alien embodiments and hybrid car skins that populate this chapter are acts in nonlinear time that denormalise and disrupt patriarchal and colonial oppression. They channel multiplicities to trouble the ideology of progress and recuperate revenge from the monopoles of god, police and father.

Queer and anticolonial revenge is coming back to a moment of violence and not letting it pass. What has been lost there and then is claimed back, the dispossession reversed, not for a return to any fiction of unbroken origin but to return with pieces to reconstitute past, present and future.

As companions for this chapter of re.act.feminism #3 we have chosen a work from the re.act.feminism archive: Maria Teresa Diaz Nerio’s “Hommage à Sara Bartman” (from 2007). Another inspiration is Bartolina Xixa’s “Ramita Seca, La Colonialidad Permanente” (2019).


Revenge is a multiplicity, a manyness in resistance 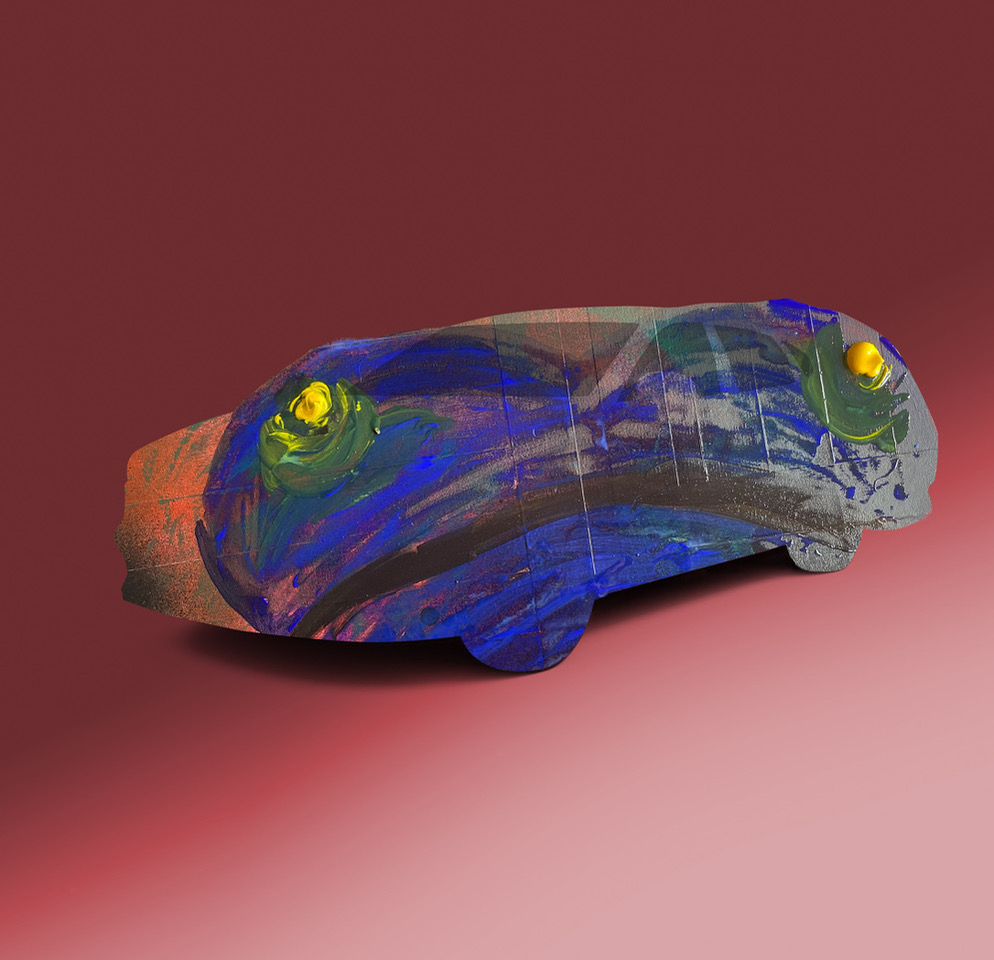 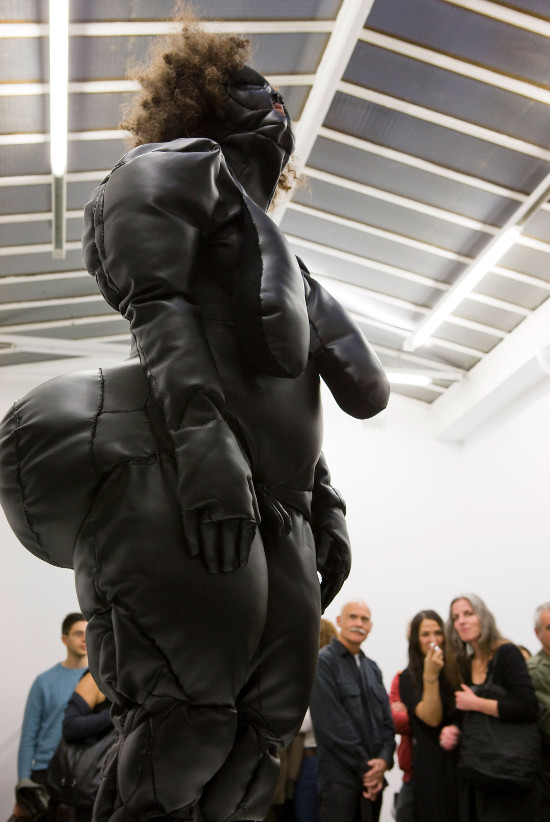 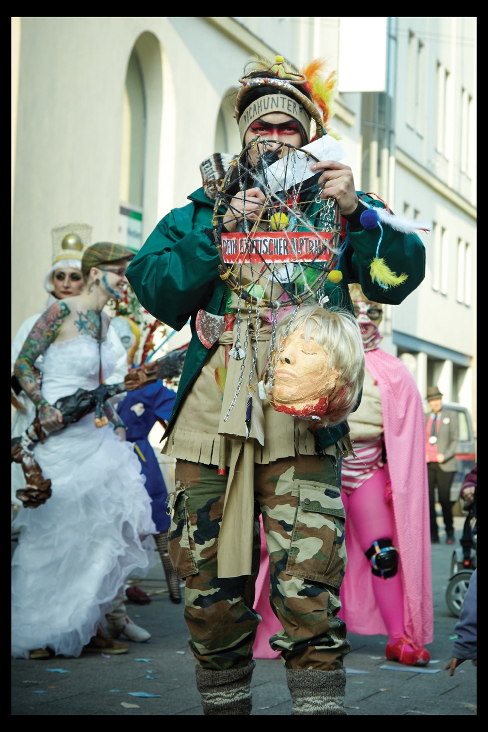 she creates nightmares that work against colonial desires
Excerpt from the zine by Oreet Ashery, Suza Husse, Verena Melgarejo Weinandt

My performative alter egos help me understand and articulate different forms of racism and discrimination that I have faced. A lot of it is reappropriating stereotypes and playing with them in a way that causes joy to me. And this is where the whole revenge story comes in. I take this figure and make her zombiesque: she is a warrior who comes back from the grave and has killed John Smith, instead of saving him. She takes on the level of dreams and the imagination – she is not a physical fighter – and she creates nightmares that work against these colonial desires and the colonial imagination.

Oreet: I am looking at several roads in Israel Palestine and how they work in relation to the colonial project of Zionism. I don’t know which came first, the memory of the performative revenge actions I performed as a teenager, or my interest in the Israeli apartheid road project. It started with remembering situations that happened to me when I was on the roads, in and around Jerusalem, when I was a teenager. Incidents that relate to being objectified by men because of my perceived gender as a young woman person. One of them was that I have been hitchhiking and then been kidnapped inside a car for several hours. A series of surreal rituals were performed. For that period of time in the car I was ‘stolen’. Kidnapping is like hijacking control, it’s like structural violence in the way colonialism is. How can you own yourself when you are stolen. In a meta sense I am thinking around Palestine being a stolen land and the kidnapping of Palestinian people’s lives, deaths, and cultures. How can I own my childhood roots in Israel? I am not comparing the two, rather, they both exist as questions of violence and belonging in my mind.

Suza: You both deal with structures and histories of dispossession. Part of the revenge then seems to be to return to these acts and infrastructures of dispossession but not for a simple reversal – not to insist on subjecthood or unbecoming object – but to inhabit a collectivity of inbetween beings, zombiesque, alien bodies that are alive and dead at the same time, human and not human. I read this as an acknowledgement of the fact that the experience of violence is refused as an individual matter, and the whole notion of singularity along with it. I am quite interested in revenge as a form of non linear temporal practice. There is the returning from the grave, there is death and exhaustion, and a moment of coming back, in a not completely functional or coherent embodiment. These are glitches carrying temporal and ideological dissonances, born from the resistance to letting violence pass and time progress. They factually manifest that time is not linear by returning to and from a moment of trauma and changing it in the present, past and future. Revenge is like time travel.


##-How Can I Own That Which Is Stolen-##
Oreet Ashery

You’re a man
You’re a beast
You have a breast
You need to
Feed
Between your legs there nothing much
And no one cares
Once you’ve hatched:

The dead alive
The living dead
It’s not your fault

Carskins: embryo, bones, breast, spray paint (##- How Can I Own That Which is Stolen-##.) by Oreet Ashery, 2022
So far so near
Being kidnapped was a trauma
They say
you courting drama
revenge is never sweet
But it wasn’t all defeat

It is like being kidnapped. I am kidnapped.
Trees, metal, speed, heartbeat.
Locked in the car skin, my new womb life.
It doesn’t matter what I love or where I went.
I no longer own myself. I’m owned

I do the math and the chances are slim. There is no way out.
I fall into learnt helplessness.
But I find a way to own myself again.
I tell a joke inside my head.

My friend keeps pointing at cars and shouting:
These are my parents!
Even I believe her.
The driver is trying to stroke her leg. Creep.
But she is jumping up and down. He can’t. It’s irritating him.

We turn into an orange grove.
Our hands are tied. We are fed fruit.
I look at the small knife.
I am going to end up in a bin bag.
In pieces.
Like the girl that was found two weeks ago.
Maybe it was these two.
Though I can tell they don’t know why it started and how it will end.

Not him again.
Locked in the car, my new life.
Next to him.
I find my backpack where I left it. I fumble inside for safety.
I took spray paint for protection.
I wish it was acid.
David and Goliath
He pulls the can away from my hand. He sprays my legs.
I have freaky blue legs.

The driver pushes my friend out.
He had enough.
She looks at me from the other side.
Pale as hell.
Like she will never see me again.
Like a traitor.

I think about the bin bag with body parts.
Trees, metal, speed, heartbeat.
Locked in the car, my new life.
They throw me out of the car.
M and I are reunited.
We are fighting and hitchhiking again.

In Tel Aviv police station, the police officer is looking at us.
He says:
What do you expect hitchhiking in shorts.

Carskins: embryo, bones, breast, spray paint (##- How Can I Own That Which is Stolen-##.) by Oreet Ashery, 2022
I am sick of men staring at my new breasts.
I want revenge.
I don’t need reminding that I am becoming a wo@man.
The road game gives me the idea.

We run out of school.
To the road.
We lay down waiting for cars to run us over.
Nearly.
Like sardines waiting for the tin opener.
The last remaining one is the winner.
Or the looser.
Depending on the drivers and how much they shout.
If I cared for a child I would stop them.
But this country is full of dare-you shit.

S takes me on his 75cc scooter, pretending to be a racer.
We stop on the highway near the Old City.
The holiest of all roads.
I strip.
Wriggling slowly like a pro.
Some cars slow down, I think.
I want them to crash.
Breasts will be the last image imprinted on their retina.
If I cared for a child I would hug her.
This country ain’t for girls who don’t want to fight.
No cars crashed or swerved.

Two years later I am kidnapped.
I’m writing this down in case someone has an idea for revenge.

Carskins: embryo, bones, breast, spray paint (##- How Can I Own That Which is Stolen-##.) by Oreet Ashery, 2022
Sixteen, Seventeen, don’t know.
Shorts, sandals, vests, small tits, small everything.

They are hitchhiking.
Like pussies. Like they don’t mean it. Like they are doing us a favour.
M is slowing down. He knows how I feel.

They come in the car. How easy was that. Too easy.
I open the dashboard so they can see the knife.
I use it to peel fruits.
I’ve got this.

We turn into the orange grove.
We feed them oranges.

They come in the car. How easy was that. Too easy.
M is driving next to number 1.
I sit at the back next to number 2.
Number 1 doesn’t stop shouting.
Where did she learn this shit?
M is distracted.
I take the knife and cut little strands of number 2’s hair.
She is fiddling with her bag.
She is trying to spray me with some blue shit.
I am going to get blind.
I grab the can and spray her legs. She looks funny.

M can’t take it anymore. He throws number 1 out.
She looks right into my car.
We know she is free.
2 is covered in blue dots.
M slows down again. She is out.
I don’t like dirt in my car.

M and I go to the car wash.
It is going to cost a bomb.